The riparian forests of the Chalakudy River have revealed the existence of a thick riparian vegetation of more than 10 meters width for a distance of 10.5 km downstream from Peringalkuth, covering an area of 58.5 hectares. Out of this, 26.4 hectares lie within the Vazachal area, including three large islands densely covered by riparian forests. The riparian forests of the area have been found to be characterized by the presence of typical riparian species of plants, in addition to evergreen and semi-evergreen species. 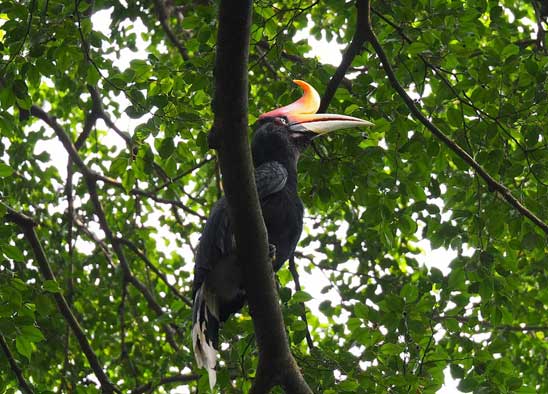 Athirappilly waterfalls are regarded as the entrance to Sholayar ranges of the Western Ghats. The Falls is situated 1000 ft above sea level on the Chalakudy river, offering a scenic combination of forests and little streams. Falling from a height of 80 feet, this is one of the largest waterfalls in the state. Many endangered and endemic species of flora and fauna are found in the forests of the Athirapilly-Vazhachal area.

Apart from the exotic plants and trees which makes up the natural beauty of the place, it has an extensive diversity of birds. Different indigenous and migratory birds call it there home. This area is the only place in the Western Ghats where four endangered hornbill species are seen. It is a reservoir of exotic freshwater fishes. More than 85 species of fishes are found here. It harbors a rich Malabar wildlife comprising of animals like sambar, lion-tailed macaque, leopard, bison, elephants etc. The Western Ghats is one of the most important biodiversity hot ad in the world. Many scientists as well as environmentalists from all over the world visit here to study and to experience this lush green forest ranges.

People can take part in daily jungle trip safaris to witness this the rich flora & fauna of Athirapally-Vazhachal Ecotourism, covering Kauthukapark, Thumboormuzhy Dam & Butterfly garden, Athirapally waterfalls, Vazhachal falls, 40 km of amidst thick forests, valleys, lofty peaks, tea garden and wildlife watching. The place instantly reminds of the jungles depicted in films such as the Jungle Book and George of the Jungle. Hence, this place seems to be an ideal ground for nature lovers, bird watchers, and photographers.